Lots of things going on in Round 7 so we were in the park early. To be honest though, you can’t begrudge a 9am start when the sun is shining and there isn’t a cloud in the sky. Slightly chilly, but with plenty of work to be done there was no time to get cold.

We started off with a Pitching and Catching clinic for our more advanced members with Sue James and Liz Reisman putting them through their paces, this was then followed up by a beginner/intermediate class. All up we had at least 16 members at these clinics. It’s great to see so many people wanting to learn and develop new skills or to improve on the ones they already have.

While the beginners were getting their pitch on, we held a management meeting and followed it up with a quick session on using the newly installed defibrillator. If anyone missed out on the session and would like to learn please see any of the executive and they’ll give you a quick rundown. 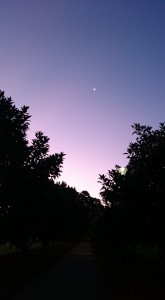 with 6 games of fastpitch.

The moon was already well and truly up by the time we locked the doors and headed home, but it was well worth the effort.

Results from Round 7: HERE

Ladder after Round 7: HERE