Busy Sunday in the park yet again, our AGM was run, and we have some new faces on the executive for 2015/16. It’s going to be a very exciting 12 months.

Participation Awards were also in play today, congrats to the following players for earning themselves a little bit of extra cash. 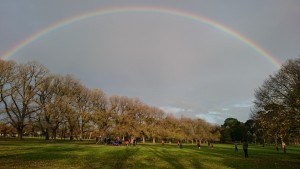 The weather was ordinary for most of the afternoon, alternating between cold and rainy and cold and windy, but those who managed to stick around until after four were rewarded with some sunshine and a rainbow over Diamond 7.

We break for the Queens Birthday Long weekend this week, good luck to MSA teams Vicsens and Melbourne Warriors, as well several other MSA individuals who are also competing. We’ll be back in the park on June 14th.

Results from Round 5 can be found here