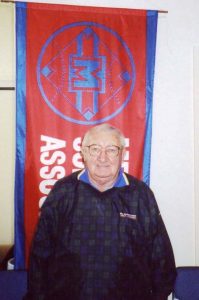 Death notice
It is with sadness that Melbourne Softball Association advises the passing of our esteemed Life Member, Graeme Robert (Bob) Gray.

Bob has been a stalwart of our sport working with a passion for Melbourne Softball and the wider softball community throughout Victoria.

Bob was actively involved, predominantly as an umpire from 1968 to 2014, and since 1979 until his retirement in 2014, as a valued member of our Fawkner Park community.

We extend our sincere condolences to his wife Vi, children Brian, Judy, Jamie, Ellen, Owen, and their families and also to his friends.

Rest in peace Bob
Funeral details will be advised when they are known.

Whilst Bob was a registered member at Melbourne he willingly gave his time to many softball events throughout Victoria.
Bob along with his wife Vi have, in his time, assisted at all tournaments Melbourne has hosted including Round Robins, Victorian Championships, Australasian Public Sector Games, and Australian Corporate Games. They have also worked at various National Championships that have been hosted by Softball Victoria and many Victorian Championships hosted by Softball Victoria’s affiliated associations.

He has umpired at many of the aforementioned events and has also been seen on softball diamonds for Melbourne’s summer and winter competitions and various summer associations’ competitions over the years.

Bob has been a great ambassador for our sport. Wherever you found Bob you would find him interacting with fellow umpires, coaches, players and administrators willingly assisting, mentoring and or supporting them.
Bob was awarded Life Membership of Melbourne Softball Association in 2007.

Our deepest sympathies go out to Bob’s family and friends.